One of the things I love most about Nashville, apart from the people, the Preds, and the food trucks, is the cultural diversity that is represented here. I didn’t know until several years after we moved here that Nashville is a major refugee intake area in the United States. Somali, Kurds, Egyptians, Mexicans, Burmese, and many many more have come to call the Nashville area home. In fact, one in six Nashvillians is foreign-born. We’ve come to love cuisine from all different regions of the world. After eating at restaurants like House of Kabob, Wild Wasabi, Café Bosna, and even Mas Tacos Por Favor, we’ve realized that the best thing about many ethnic foods is not the complexity but the simplicity of the foods.

One such unique combination that we’ve loved is the Middle Eastern cuisine of House of Kabob. Cucumber, tomato, and onion drizzled with lemon. Naan bread with feta and cilantro. In fact, this snack has become a favorite in our household. The one problem is that naan bread is as hard to find as it is delicious.

In search of our precious naan, we began to search out different stores, and finally decided to venture into an international market that is located about 5 miles from our house. We quickly learned that it has great freshly-baked bread of many different types in stock, all at great prices. We’ve come to realize that they have good deals on produce as well, including some more unusual selections that we might not see elsewhere. And spices are dirt cheap! Our favorite aspect of the international market, however, is the atmosphere.

Many times when we walk in, other customers are hugging each other and conversing in other languages. Though I don’t understand the verbal language, I can easily recognize the language of love. If you speak English in the International Market, you are in the minority. But not just one ethnic group shops there. We find Hispanics, Africans, Middle Easterners, and Caucasians browsing the aisles amongst each other.  Families shop together, as parents show their children products from their home countries.  The sights and smells are different from what we are used to, and are fascinating. And indeed, we are becoming increasingly brave at trying new items. The owner greets each customer, and frequently asks about jobs, home countries, and other news. As he rings up orders, he declares the price to be paid with conviction, in a thick Middle Eastern accent, and in cents. “Eight hundred and forty nine cents for you today!”  It doesn’t take long to become a member of the extended family of the International Market.

In fact, our third visit was this week, and the owner remembered us. We were buying freshly baked bread and a small selection of vegetables – cilantro, onion, tomato—as well as a few peaches. He rang up our order for the bread, cilantro, and peaches, and then picked up the onion and tomato and held them up and said as he looked us in the eyes, “For you.” Then he tucked them into our bag and pronounced, “Five hundred and twenty three cents!”

It’s interesting that for as much cultural diversity that is represented in that market, those who shop at the International Market have much in common amidst their dissimilarity. They are from all different corners of the planet, but they are all far from home. Not looking like typical Nashvillians, or sounding like typical Nashvillians, they have come together to celebrate the commonality of diversity.  And being far away from their own communities, they have created their own sense of community in a pocket of Nashville along Nolensville road.

In the not too distant future, two little ones will be joining our family who will be from another corner of the world. We won’t look like the typical Nashville family, or sound like them either, but we love the fact that we already know that we’ll have a place to shop where being different is the norm. They may not have the selection of products that Kroger has, but their diversity of experiences make all the difference in the world. 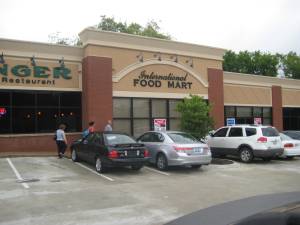 2 thoughts on “Shopping for Diversity”