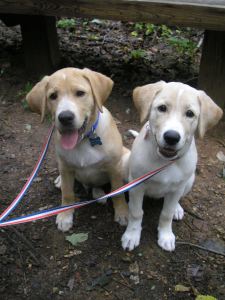 Five years ago, we brought two 8-lb Labrador retriever puppies into our home. They were a little bigger than the size of a bag of sugar, and perfect packages of puppy-smelling fuzzy love.

We gave them names that matched: Buddy and Holly. While they were from the same litter, they could not be any more different.

Buddy is 95 pounds of nap-loving, drooling bliss. He loves kisses, snuggles, and hearing his name. He wags his tail if I come within 15 feet of where he is. He wags his tail when I sneeze or smile. He wiggles and wags his tail when he falls off the bed, or when he runs in to trash cans while on a walk. He’s terrified of the sound of a fork on a plate, fireworks, and being in the kitchen. But his fears are balanced by his abundance of love. When we take him out in public, he beams with excitement with every new person he meets, as if the purpose of the existence of others is merely so Buddy can love them. He isn’t the most intelligent dog, but you won’t find one who is better natured, at least 98% of the time. The other 2% is in the morning when he first wakes up. He’s not exactly a “morning dog.”

Holly is much more the morning dog. She lies wide-eyed in wait for my alarm to go off in the morning, so that she can pounce on both Ken and I and lick us into a wakeful state before she attacks Buddy with the same enthusiasm – hence his grumpiness. Holly has no snooze button, and the word “Saturday” means nothing to her. She is incredibly easy to train, very intelligent, and we’re pretty sure she understands most of what we say. At times we are thankful that she doesn’t have opposable thumbs, because we’re fairly certain she would lock us out and have the house to herself. She is our “busy girl” and is very scheduled, knowing when it is time to wake, sleep, walk, eat, and even when she wants affection. She has specific times in the day that we are allowed to lavish affection on her, but she is not receptive if she’s not in the mood. Try to pet her or scratch behind her ears at the wrong time, and we’ll get a sneeze of disgust or she’ll merely leave the room. We believe she may be part cat.

Two different dogs from the same litter, and we love them both dearly.

At times, I see my relationship with God in my dogs. In all of my scheduling, discipline, and planning, do I leave enough time for spontaneous expressions of love for my Heavenly Father? Do I wiggle with delight when God’s presence is even near? While it is wonderful to have scheduled times of devotion and reflection, are those the only times of the day when I express my love toward God, and open my heart for His love toward me? I know it bothers me that I can’t lavish affection on Holly unless it’s the right time of day, or if she’s in the right frame of mind. I wonder if God is offended when I quarantine His presence to a designated time on my calendar.  It’s not that I don’t love Holly, it’s just that she makes loving her more difficult. How many times have I missed God’s expressions of love for me because I’m a “busy girl”?

The more I know and love God, the more I realize that the love of God will not be quarantined. Either I am open to Him, or I will miss out. And in response, I want to lavish reckless amount of love on God, as if the only reason for my existence was just to love Him.

Even if it’s not on schedule.