Last year at this time, I was gathered around with a group of friends at a Christmas party. The fireplace was crackling, coffee was brewing, desserts were digesting, and we were reflecting on how God was speaking to us at Christmas.

For me, it was the Incarnation. Why in the world would an omnipotent God wrap Himself in flesh to be born as a baby in a stable? Imagining the situation anew is almost offensive. Jesus, please, not in a manger, there’s donkey drool in there. Please, Jesus, at least a small palace or the temple, not in a temporary shelter away from the comforts of home– anyone’s home. No Jesus, not born to a poor teenage girl from Nazareth — at least choose a family with some clout or prominence.  Your message is too important, Jesus, to not bring it to a better platform than a poor homeless baby wrapped in strips of cloth and lying in a feeding trough.

Today, I’ve still more comfortable with a Jesus who is not quite so humble. The Divine nature, I’m satisfied with. Healing disease, casting out demons, walking on water, ascending into Heaven on fluffy white clouds with crowds standing in awe — that’s a Jesus who is easy to get on board with.  It’s the mucking around with fishermen and tax collectors, hiding out as a refugee in a foreign land, starving in the wilderness that doesn’t sit well with me. The Creator of the nighttime stars depending on the kindness of strangers for a place to lay His head at dusk. Letting snotty little kids climb on His divine lap while He tousles and parts their matted hair with the same hands that parted the Red Sea.

While I am comfortable with the divinity of Christ, the indignity of the Incarnation is difficult. Why? Because if the Creator of the Universe is as Humble as He is Divine, there is no room for my own pride. My arrogance stands in stark contrast with a glorious Savior who chose humility when He deserved everything but.

If I am striving to be like Christ, I cannot only be comfortable with the trappings of His blessings, I need to embrace the trappings of His humility as well. I want Jesus to use me to heal and to teach because I love the splendor of His omnipotence. But if there a place I will not live, an indignity I will not endure, an economic status I will not tolerate, or a death I will not die for the sake of His kingdom, my pretense flies in the face of the humility of the Incarnation. After all, Jesus,

“Who, being in very nature God,
did not consider equality with God something to be used to his own advantage;
rather, he made himself nothing
by taking the very nature of a servant,
being made in human likeness.
And being found in appearance as a man,
he humbled himself
by becoming obedient to death—
even death on a cross!”

Jesus, it would be so much easier if you were born to a wealthy public figure in a sterile maternity ward, lived in a 2500 square foot house with a couple of cars, and never spent a hungry or homeless night!

Two weeks ago, I explained the Incarnation to Addie and Palmer over dinner — how Jesus left the perfection of heaven to come and live on stinky earth. And even though Jesus deserved so much more, sometimes Jesus was hungry. And sometimes Jesus didn’t have a place to sleep at night.

The kids were wide-eyed in awe. “But sometimes in Africa we were really hungry and we didn’t have any food or know where we were going to sleep. Jesus knows what that’s like?”

Indeed, I’m blessed to embrace the Divine wrapped in the indignity of the Incarnation. 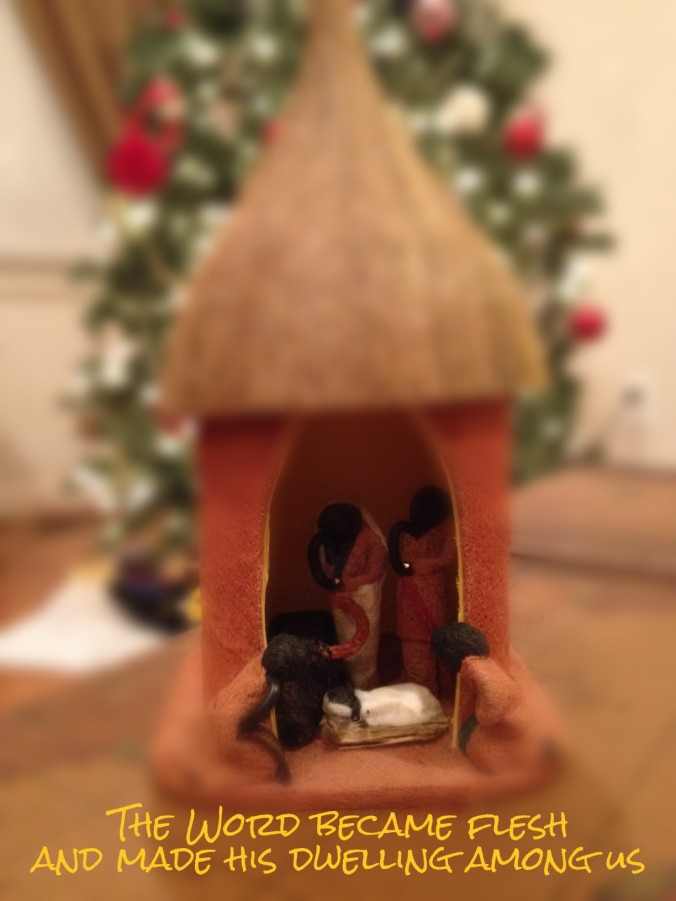